Sports have always played a big role in American culture. Celebrated for inciting a sense of community across the nation, the US sports market is holding up strong. Currently estimated at $73 billion, that is 50% larger than the sports market of Europe, the Middle East and Africa combined. Yet while the industry is steadily growing, it’s the fans who are taking the hit with perpetually rising prices of game tickets. Effectively, live spectatorship is becoming increasingly exclusive, with many fans destined to tune in on TV broadcast instead.

This couldn’t be more true for the NFL. Arguably the most popular sport in the country, it has also become one of the most expensive to watch. With the annual Super Bowl just around the corner, we have compared average ticket prices by team to the median US salaries. This has allowed us to see which teams are guilty of abandoning their fans through charging extortionate ticket prices.

We’ve calculated that amongst the most expensive teams are Los Angeles Chargers, Philadelphia Eagles, and Carolina Panthers. All charge over 10% of the average weekly median local salaries. Out of the above, only Los Angeles Chargers have made it to the playoffs. Based on their stellar performance, it seems likely that the team could make it to Super Bowl 2019. If you’re a fan, we hope you have deep enough pockets to fit in that bill!

Due to take place on the 3rd of February at the Mercedes-Benz Stadium in Atlanta, Super Bowl is an exclusive sporting event open only to those ready to spend at least $3,354 per ticket. While this seems mind-boggling on its own, let’s not forget the costs fans must endure before their team even reaches the final game. If we were to add up the prices for individual preseason, season, and playoff games, supporters of the winning team would be splurging some serious money. So if you’re really committed to supporting your team, be ready to spend tens of thousands of dollars on this expensive pastime. 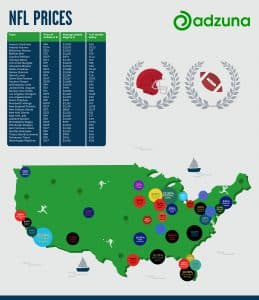 Adzuna searches thousands of websites bringing into one place almost every job vacancy in the US. From this we were able to gather accurate estimations of local salaries. We then compared these average advertised salaries to the average adult game ticket for each team. Using this data, we then worked out what percentage of the average weekly salary a fan living near their team would have to pay for tickets.

Adzuna.com is a search engine for job ads used by over 10 million visitors per month that aims to list every job, everywhere. We search thousands of websites so our users don’t have to, bringing together millions of ads in one place. By providing smarter search options and powerful data about the job market, we give jobseekers the information they need to take control of their careers.