Work or Pleasure? According to recent data from Adzuna, 40% of Americans have been romantically involved with a co-worker.

With Valentine’s Day approaching, new data has revealed that workplaces across the U.S. are a breeding ground for romance. According to a new survey from job search engine Adzuna.com, two fifths of Americans have had a fling with a colleague, and over 10% of people met their current partner at work. 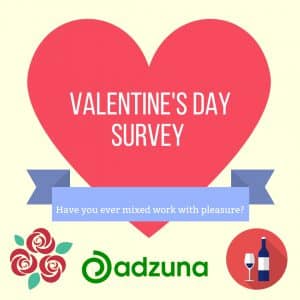 45% of respondents said they are open to the idea of getting romantically involved with a colleague, and 30% confessed they have fantasized about doing so. Interestingly, 17% of these fantasies were about someone in a higher position than them. This is reflected in the fact that 13% of people who have been involved with somebody in the office, have done so with their boss.

For some people, these relationships had benefits other than just romance: 10% of those who have dated someone in the office said they had benefited from it professionally.

Romance steals the spotlight for the Media and Entertainment industry

However, home certainly isn’t where the heart is for the pharmaceutical industry, fairing the worst for workplace romances, with just 10% of respondents within that industry claiming to have had romance with a colleague. And it’s money over love for the IT industry, who have also seen fewer workplace relationships than any other industry.

Don’t get your honey where you earn your money

Despite 52% of people in a workplace relationship staying together for over a year, the negative implications are obvious. Near a quarter of people who dated someone at work eventually resigned from the role as a direct result. Half of those resigned because the relationship went sour, with the other half made the ultimate sacrifice, resigning because they felt it was best for their relationship to succeed. To compound this, only 10% of those who have dated colleagues are still in the relationship. It is, therefore, unsurprising that 15% of workplaces ban dating in the workplace.

“With the traditional office job evolving and fewer people physically in the office from 9 to 5, we were surprised to see just how many people in the U.S. still find love in the workplace. What’s also surprising is the level of variation between industries. While a staggering 70% of people who work in Media and Entertainment have had a relationship within the workplace, those working in IT or the Pharmaceutical industry are far less likely to find love in the office.”

“While 17% of office romances have led to marriage and 5% babies, a larger proportion at 25% have left the company directly as a result – so workplace relationships should certainly be approached with caution.”

To gather the data for this survey Adzuna undertook a anonymous survey of 1,000 U.S. residents between 17th January 2019 to 20th January 2019. The respondents were a balanced group representative of the U.S. population.

Table 1: Industries which have had a relationship within the workplace

Table 2: Industries which have dated the least in the workplace

Adzuna is a search engine for job ads used by over 10 million visitors per month that aims to list every job, everywhere. We search thousands of websites so our users don’t have to, bringing together millions of ads in one place. By providing smarter search options and powerful data about the job market, we give jobseekers the information they need to take control of their careers.

Adzuna was founded in 2011 by Andrew Hunter and Doug Monro, formerly of eBay, Gumtree, Qype and Zoopla. It is backed by leading Venture Capital firms Passion Capital, The Accelerator Group and Index Ventures.

Our data also powers the Number 10 Dashboard, used by the British Prime Minister and senior officials to keep track of economic growth on a daily basis, and is now provided to the Office for National Statistics to help them build real-time labour market indices.

Adzuna’s mission is to be the best place to start looking for a job. We love using the awesome power of technology to help match people to better, more fulfilling jobs and keep America working.