The data in this post is accurate as of June 8th, 2020. We will continue to keep our finger on the pulse of hiring and job search behavior throughout the coronavirus crisis with regular updates and insight into the global labor market.

U.S. sees dramatic unemployment rate drop to 13.3%, but a word of caution

Positive news on Friday, as the U.S. economy gained a staggering 2.5 million jobs last month. This is the largest month-on-month change in non-farm payroll employment since 1939. A record and very positive news for the economy, but these numbers need to be taken with a pinch of salt. The majority of this activity is temporarily laid off employees going back to work. ‘New’ job creation (chart below) remains worryingly low and permanent job losses remain high. The job market is in a deep hole, with nearly 20 million fewer jobs than in February.

To the contrary to economists’ predictions (including this analyst!), employment growth has happened sooner than expected. Many thought the unemployment rate would hit 20% in June, with a slow and cautious recovery only beginning at the end of the summer. The ‘unlocking’ of America has clearly benefited some sectors more than others. The latest data shows clear bouncebacks in Construction, Healthcare, and Retail but the greatest improvements can be seen from industries hit hardest in March & April. The Food & Beverage sector saw 22% of jobs growth between April and May and the Travel & Hospitality sector was responsible for 1.2 million of the jobs created in the last month, regaining about one-sixth of the jobs lost in the last 3 months. The important thing to note here is that this is a one month window of data. The key will be sustainability.

A note on race & ethnicity

The latest data from the Bureau of Labor Statistics shows that despite record-setting job creation growth in the last month, worryingly, Black and Asian workers saw unemployment rates continue to rise between April & May. The rise among these groups is fractional in comparison to March & April, but a worrying sign that, as we’ve seen in previous recessions, certain communities are hit much harder than others.

Unemployment rate by race and ethnicity: 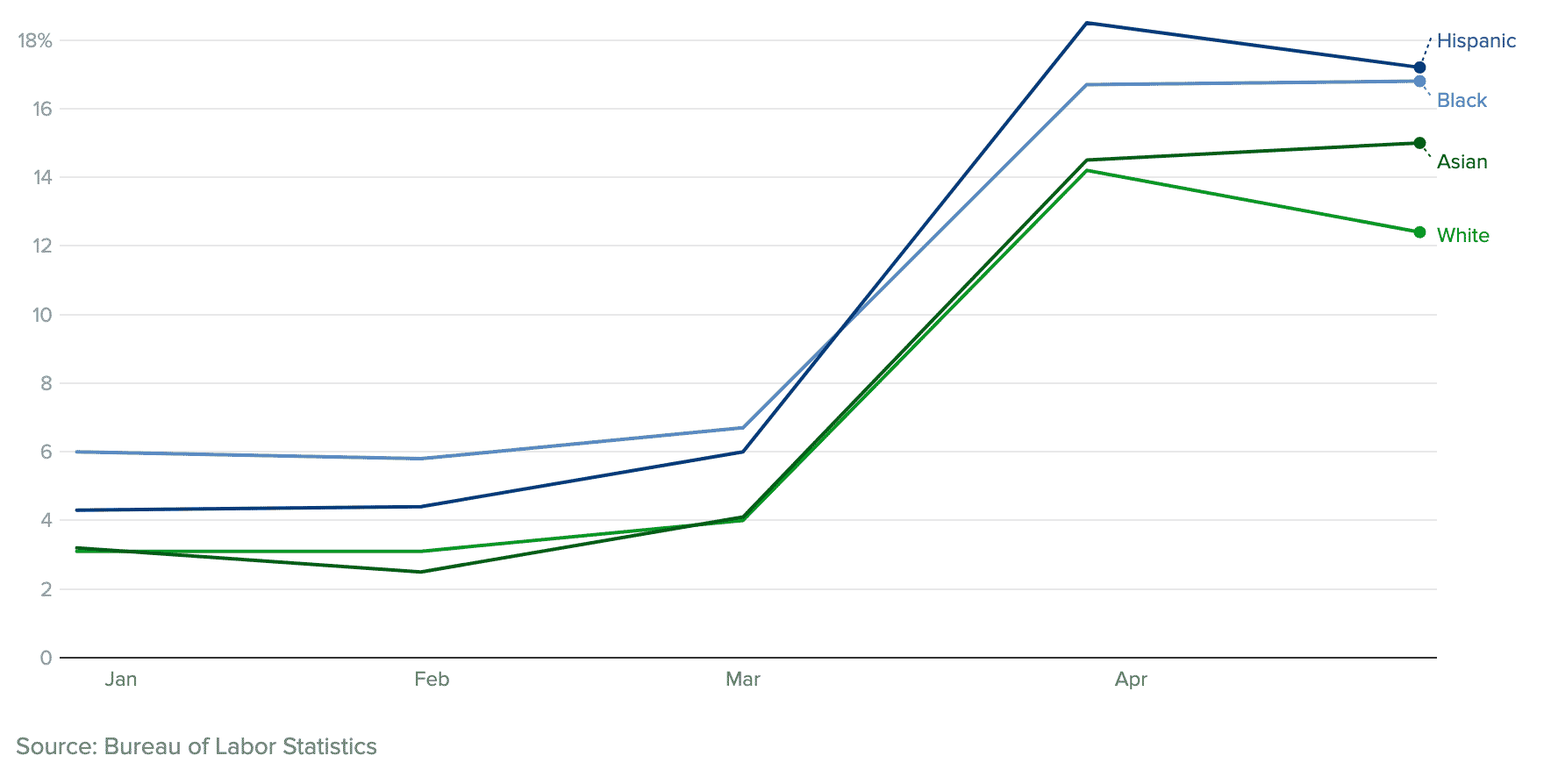 While many of the millions of jobs in Friday’s report are simply ‘sidelined’ folks returning to work, there are still over 2.6 million ‘new’ jobs being advertised on Adzuna in America today. Here are the top 10 hiring companies in the U.S. in June 2020.

Where have all the jobs gone? A regional breakdown